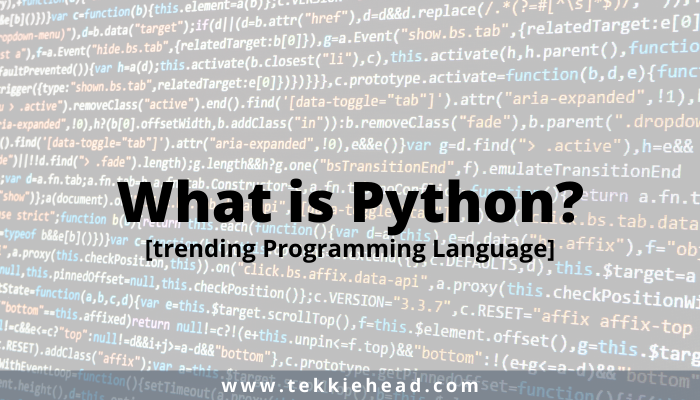 What is Python ? It is a high-level, structured, open-source programming language that can be used for a wide variety of programming tasks. Python was created by Guido Van Rossum in the early 1990s, its following has grown steadily & programmers are getting attracted day by day.

It is very user-friendly language, its syntax very much similar with what we write in English with some programming rules.

It’s an interpreted language, it reads a high-level program and executes it, meaning that it does what the program says.

When we say it is open source it means, it is freely available on internet to download and get started with. You can download and install Python from its official website.

In addition, some third-parties offer re-packaged versions of Python that add commonly used libraries and other features to ease setup for common use cases, such as math, data analysis or scientific use.

It has a large and comprehensive standard library.

Python is an open source programming language that was made to be easy-to-read and powerful.

A Dutch programmer named Guido van Rossum made Python in 1991. He named it after the television show Monty Python’s Flying Circus.

The language’s core philosophy is summarized in the document The Zen of Python (PEP 20), which includes –

Python 3.X is a major revision of the language that is not completely backward-compatible with previous versions 2.X

List of python releases, you can opt any version and directly install on your computer. Installables are available on its official website python.org
Always prefer to install latest version of software which has upgraded functionality.
Python Version 3.x & 2.x

Python is used for?

Python is used by hundreds of thousands of programmers and is used in many places. Sometimes only Python code is used for a program, but most of the time it is used to do simple jobs while another programming language is used to do more complicated tasks.

It has wide varieties of standard libraries made up of many functions that come with Python when it is installed. These libraries make it a powerful language.

There are many other libraries available on internet that make it possible for the Python language to do more things.

Areas where python is often used:

Writing python program is itself having a fun, you will get know how when you explore more python world.

Here we start with our first program in python. You can write same python program in many ways as per your programming structure with same output.

This is the first simple python program to print “Hello World!”

Or you can write in another way!

You can create variables and assign any values – number or string to them, even you reassign them multiple times at any point in your program without worrying how it internally works.

Python is super awesome when it comes to variable assignment and memory management.

For brief description about variables & data types in python take a look at my other post.